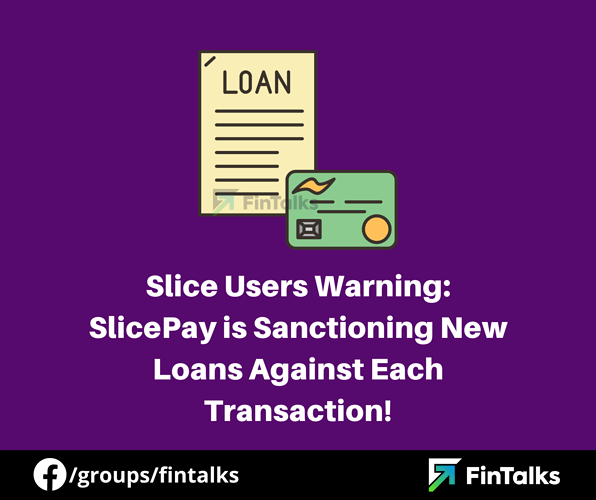 In case you are using Slice BNPL Card, there are urgent matters you need to see this RIGHT NOW! Also, please use Slice Card at your own risk. Without much fuss, let me explain the matter to you!

Slice has updated its Most Important Terms of Product, which you can read here. In case you don’t want to read the entire thing, here’s what you need to know: 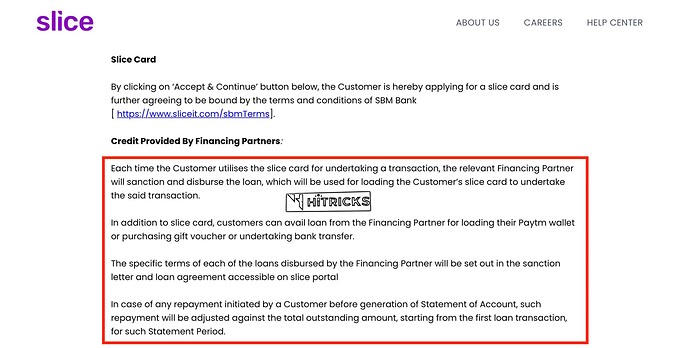 Each time the Customer utilises the slice card for undertaking a transaction, the relevant Financing Partner will sanction and disburse the loan, which will be used for loading the Customer’s slice card to undertake the said transaction.

What this means: Every time you transact with your Slice Card, a new Loan will be sanctioned against your name.

The specific terms of each of the loans disbursed by the Financing Partner will be set out in the sanction letter and loan agreement accessible on slice portal.

What this means: You can read the loan agreement and sanction letter on your Slice App against each transaction.

I had tweeted to Slice asking for clarification in this regard. You can check out my tweet here. I request you to Retweet it also so that others can get aware. 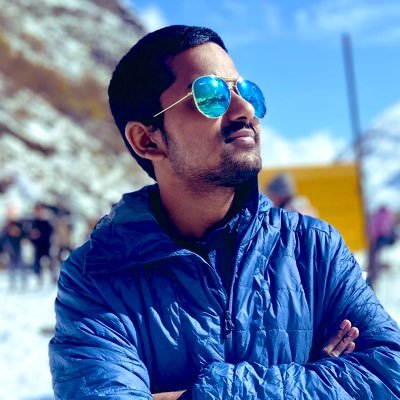 @HelloNirmal
Dear @sliceit_ your updated TnC states that each time I use #slice for a transaction, you’ll sanction a new loan against it? That will ruin my CIBIL since bill is paid monthly, where I might have 30+ monthly transactions. Pls throw some light on it. Ppl using #slicepay pls RT. 🙏 https://t.co/gBhJPczZYF 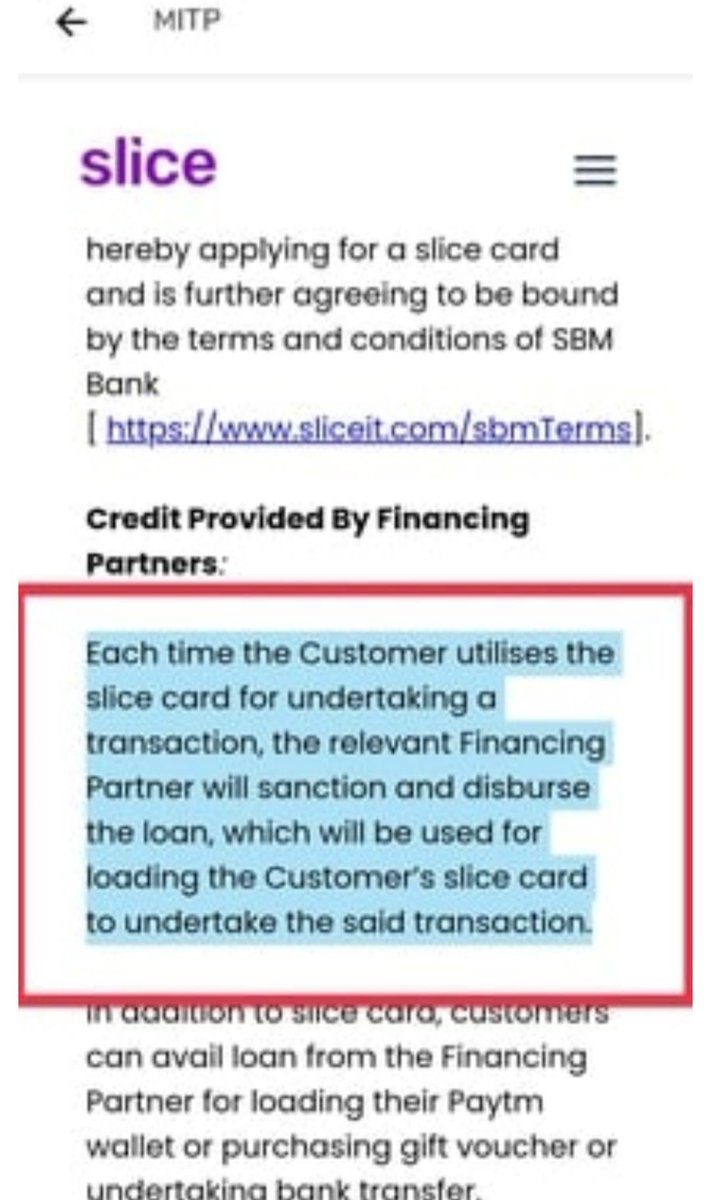 @HelloNirmal Hi there, we understand your concern and would like to clarify that all your card transactions in a statement period will be reported as a single disbursement to credit bureaus. Please be rest assured that your credit score will not be impacted by this change. ^Vedik 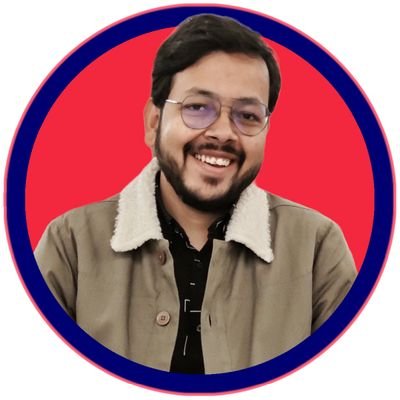 @indyan
@HelloNirmal @sliceit_ True. And @sliceit_ has deleted the message. Thankfully I've a snapshot of it from telegram. Also, it's unethical to make such significant changes without alerting customers. https://t.co/CRu9MMMcOy 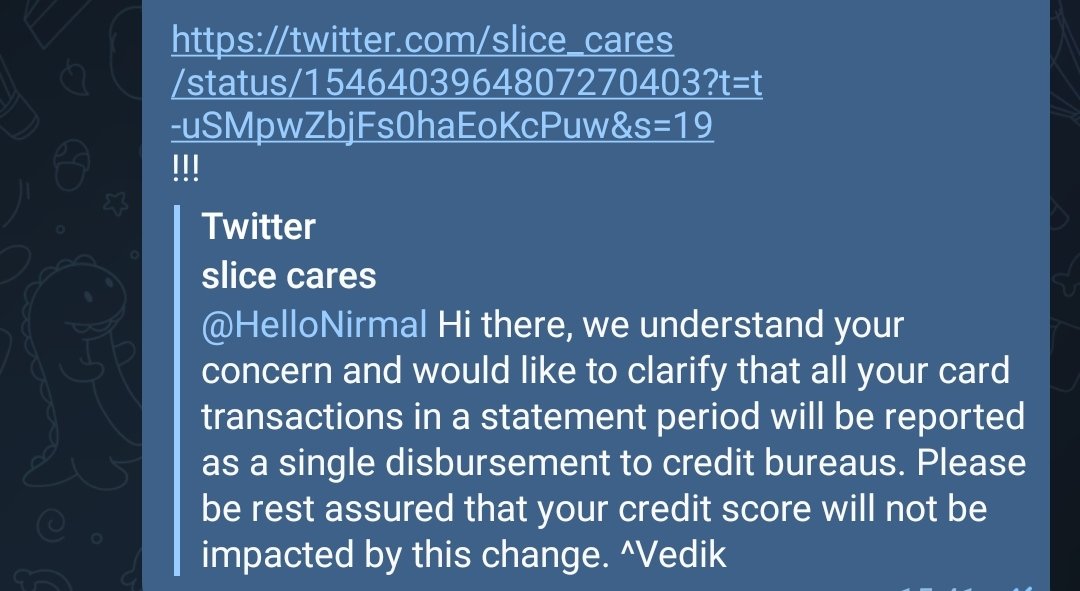 Later on, I got a call from Slice Team, who explained the same thing to me as their tweet, that all my card transactions in a statement period will be reported as a single loan, so I need not worry.

I pointed out to them, that it was not what was written in their MITP, and either you rectify your MITP or you issue a statement addressing the same. They said, okay they are looking into it.

I wasn’t doubting them till that time and really wanted them to look into it. I also tweeted about my interaction with them.

@HelloNirmal
UPDATE: I had a talk with @sliceit_ team. What I got to know: You do 10 transactions per month, and your bill is generated, and you pay the bill, after that they reports that to the credit bureaus. I said, but that’s not exactly what was written in the TnC doc. (1/2)

@HelloNirmal
So they said they will look into it and probably (either/or): 1. Make some changes in the TnC so that it becomes a bit transparent. 2. Issue an online statement addressing the concerns. So at this moment I’ll wait for that, and meanwhile, not using my Slice Card for any trx.

Although in my tweet I said that I won’t be using the Slice card until they address it, I took a risk to verify what they said. I added ₹1 to PayTM Wallet (they charge some extra fees for using Credit Card/BNPL Card, so I had to pay a net amount of ₹1.03) using my Slice Card. 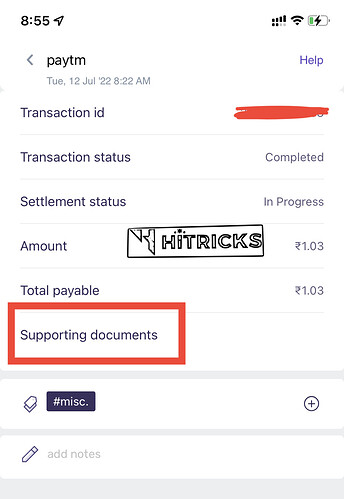 It had a section named ‘Supporting Documents’, I clicked on it, and there were two files: Loan Agreement & Sanction Letter. 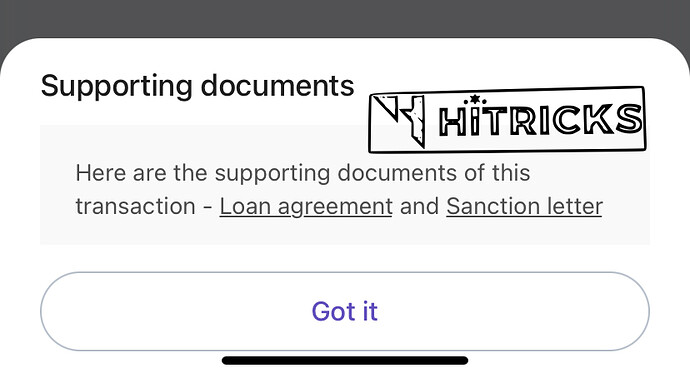 And when I checked them out, it turned out to be true: They had issued a loan amount of ₹1.03 against my name. Good heavens!

Here’s the first page of the Loan Agreement: (Notice the date, its when the transaction was done, and this will be unique for each day) 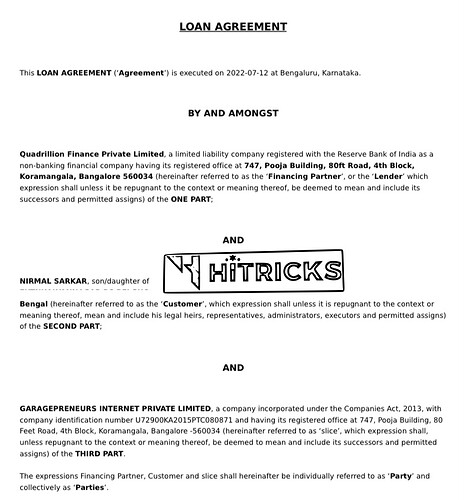 Here’s the Details of the Loan Sanctioned, as written in the Loan Agreement: 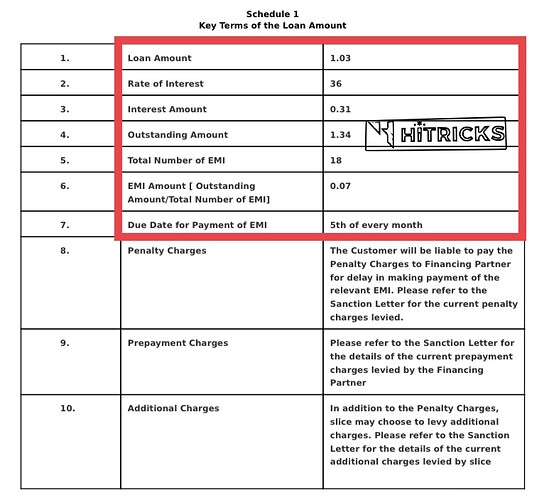 So, for each transaction you carry out with Slice, you will get a Loan Sanctioned under your name, like this, which was exactly what was written in their MITP.

By the way, you won’t be incurring interest if you pay your outstanding amount before the 1st Due Date. Only if you repay the loan in parts (EMI), you will incur interest. This is clarified in their Sanction Letter. 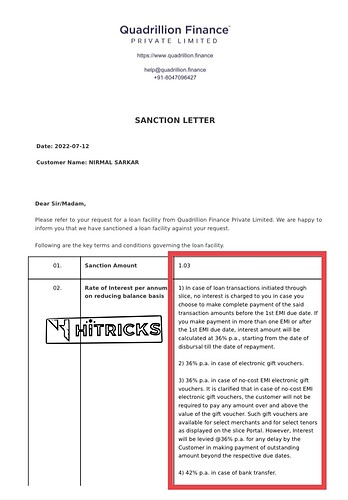 This is the first page of the sanction letter (above). I have uploaded the rest of the pages (except Page 1, which contains my personal details) on Dropbox. It contains their fees, and tax details. You can read it from here.

These were my findings. Now it is over to you. You decide how to go forward with this. You may seek further clarification in writing and then decide. It is totally up to you.

In case you have something more to share, feel free to comment below. You can easily register on our FinTalks forum and interact freely.

Thank you for reading. Don’t forget to join our FinTalks Facebook Group & FinTalks Telegram Channel for regular updates on banking and finance.

I think it’s time to close the Slice account. This is insanity. Thanks for sharing this with us @nirmal

Hey @ins yes I am also thinking to close it down.

Well you know what to do @LUKA

I don’t think I can trust them anymore. I wish they were upfront about it. Hiding the details under TnCs shows you’re like any other institution that’d mess me up the moment you get a chance to do so. The way you operate and service your customer base speaks volumes about the kind of org you are. I just looked at a few of my transactions dated 26Jun-5Jul and all of them have these supporting documents mentioned. I wouldn’t have been this furious if they’d have sent a simple email explainer about this change and how it might affect me (even if it doesn’t). I don’t want to know about these so-called ‘small’ details from a third party. At least not for a ‘financial’ service I am a customer of.

It’s not the loan-per-spend process I’d be cancelling my card for but the lack of communication from their end and shoddy handling of the entire scenario you faced (like deleting their tweet).

True. Also, make sure to refresh your CIBIL next month once.